Pakistan Army after every six months announce Jobs of Officers as a Lieutenant in Pakistan Army . The selected candidates got training in Pakistan Military Academy, Abbottabad for Two years. As all we know Joining Pakistan Army is not only  a profession , but it is also a sacred duty of each and every Pakistani citizen to serve their nation and secure our National borders. Pakistan Army not only serves in Battlefields but also in  handy times like Earthquakes, Floods , Elections Duties , Law Enforcement etc. Pakistan Army also serves in United Nations ( UNO) Peacekeeping missions.

The criteria for Joining Pakistan Army as Lieutenant is not quite difficult . Each and every citizen can apply for this job who is fulfilling the criteria given below :-

1- All candidates have to appear in online written test in selected Army Selection Center.
2- The Pattern of paper will be Intelligence tests & Academic Tests.
3- All candidates have to appear in Physical and medical tests in ASRC.
4- After physical & medical tests , candidates will be interviewed in selection centers.
5- Successful candidates will be given ISSB Forms and they will be tested physically , mentally & Psychologically  in ISSB Centres ( Kohat , Gujranwala , Malir & Quetta) for four days.

1- Candidates Twice Not Recommended by Army / PAF / Navy are not eligible to apply.
2- Candidates having tampered documents & certificates.
3- Under age or over age candidates.

If You Have any question, Please comments fast . We will reply you as soon as possible. 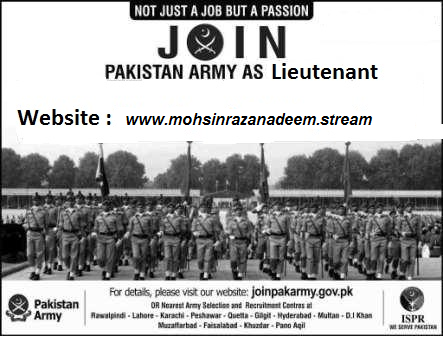