In today’s world everyone is aware and worried about the diseases like breast cancer and Ebola but to surprise you, the fact is none of these two makes it to the list of top five diseases that causes death. The most surprising thing during the research was found that even after so much development in the field of science of medicine, the top five deadliest disease are least preventable means it is very hard to cure one totally from these diseases. But somehow with the help of advancement in medicine, doctors have reduced the number of deaths due to those diseases. Here is the list of top five diseases that causes death.
1-CORONARY HEART DISEASE:
This disease is also called coronary artery disease or Ischemic heart disease. It actually happens when the vessels, from which the blood is flown, get narrowed. According to the WHO approximately 7.4 million people are died due to this diseases which makes it the most deadly disease. The causes of this disease includes high blood pressure, smoking, less exercise, diabetes, obesity and others.
2-STROKE:
Stroke is the name of a diseases in which patients artery of the brain either gets leak or block due to stress or any other reason, because of this the oxygen deprived and brain cells start to become dead within 50 to 55 seconds.as per the survey conducted by the WHO, it states that about 6.74 million of people are dying yearly due to this life threatening disease. The preventive methods to disease are simple and easy which includes eating healthy and hygienic food, exercise on regular basis and less stress on the brain.
3-COPD:
Basically COPD is the short form of Chronic Obstructive Pulmonary Disease, which makes it tough to breathe. It directly effects our lungs and causes to thicken the airways of the lungs due to which breathing becomes a problem. To say the worst it is said that it has no cure which makes it one of the most deadly disease. It is recorded that almost 3.17 million of people die due to COPD. The reasons to become a patient of COPD are air pollution, dust, tobacco etc.
4-LOWER RESPIRATORY INFECTIONS:
According to the World Health Organization lower respiratory infections become the reason of death for almost 3.12 million people per year globally, which is quite surprising figure. The diseases basically includes bronchitis, pneumonia and influenza. The main reasons of this disease includes smoke, outdoor pollution, gas smoke, wood smoke, and bad hygiene.
5-TRACHEA, BRONCHUS AND LUNG CANCERS:
Basically cancer is caused by the unnecessary growth of the cells inside the body and trachea, bronchus cancer are respiratory cancers which makes living very much tough for the patient.it very much difficult to cure it but one can minimize their effect and pain with the help of medicine. This disease can be stopped from making more damage inside the body by taking prescribed medicine at regular timing otherwise it’s hard to cure it. Almost 1.74 million people are died yearly due to this disease. The reasons for this kind of cancer include smoking, environmental pollution and unhygienic food. 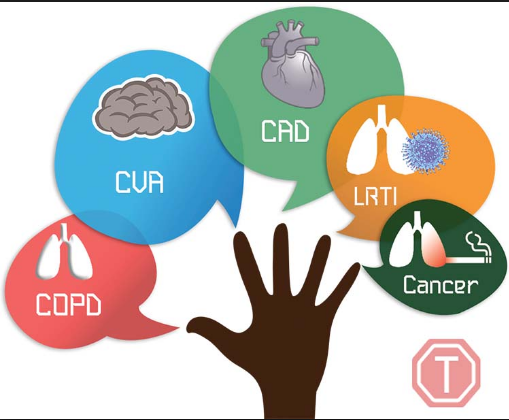